I know everyone makes fun of Southerners for how we react to snow.  I get it.  These people have snow 1/2 of the year long.  They think it’s ridiculous.  But what I don’t think that they understand is for us snow is like rain in the middle of the Sahara desert. Seriously, it’s like being from the red and orange land of Arizona and seeing the blues and greens of the Mississippi for the first time (or second time).  Real snow – the kind that STICKS and you can PLAY in – is so rare. 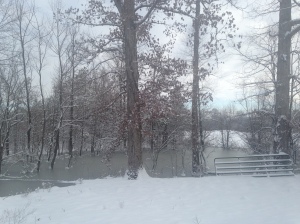 Just for today, I want you to put all of your judging aside 🙂 and see this Snowapocalypse through a Southern point of view.  (Seriously, we got like 8 inches.  That’s kinda a big deal.) 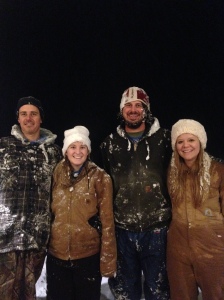 We played well into the night with friends and family.  We had pool floats, plastic sleds, and a John Deere Gator – you can only imagine 🙂 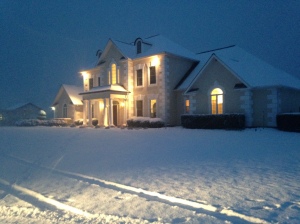 You must admit – there is something magical about it all.

The next morning we decided to play with the animals – in the snow, of course! 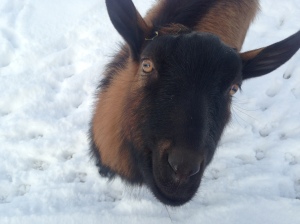 And by play I mean – we even took the puppies sledding 🙂

Here is a video of Justin sledding with my sisters Pyrenees, Zeus.  He is from our first litter and 8 months old.

Here are two videos of the puppies sledding 🙂

Kadi tried all by herself:

Either way I would say everyone on Maynard’s Farm has enjoyed our Snowapocalypse!

I have been asked a lot why we are raising goats, or why we have chickens and ducks.  Most people assume we are “crunchy” or “granola” people.  Others think we are jumping on this “homesteading” movement.  All of these are laughable to me.  If you know me you know I could care less about whether or not Dr. Pepper is good for me ( I have cut it out because it makes me FAT… NOT because you can clean toilets with it).  I drink 3-6 cups of coffee a day.  I LOVE chocolate.  Tell me all you want a snickers bar is full of processed sugars or even carcinogens … I DON’T CARE.  It is yummy goodness.  My perfect day would involve lots of sun exposure on a beach (and if that isn’t possible the tanning bed!), a good book, Dr. Pepper that wouldn’t make me fat, and all the Thin Mint Girl Scout cookies and Snickers bars I can eat.

And as for this “homesteading” movement… I don’t even know what that means.

Now, let me tell you about myself.  Maybe with this knowledge you’ll see why farm life is the life for me.  I grew up in (and have currently moved back to) Villanow, Georgia.  When I was a child we were not even a dot on a map.  Now, thanks to google…nothing is hidden!  Ha.  And Villanow is now a single, tiny dot on a map of Northwest Georgia.  For the first 12 years of my life my parents owned Edwards Country Store.  It was the oldest store in Georgia still operating until the people we sold it to shut it down several years later.  (But that is another story for another time)  When I tell people about my childhood…most do not believe me.  So what I am about to tell you, you may or may not believe.

When my parents moved to Villanow they had a small house off of South Dick Creek Rd.  (Yep, that’s the name.)  My dad raised cattle and baled hay for a living, and grew various crops.  My mother was a dental hygienist.  When the General Store went up for sale my father bought it.  I was born two month later, May 7, 1988.  The first twelve years of my childhood are much different then most kids today.  Villanow was, and to an extent still is, a farming community.  Many of the residents do not have past a 3rd grade education.  I have witnessed MANY people’s “X” for their signature.  Some of the most intelligent men I know can neither read nor write.  They didn’t need to be able to.

It is with these men and women I spent my days.  I learned to pick cotton (which is painful).  I bottle fed calves.  I have picked corn, baled hay, stacked sod, and canned vegetables (which I am relearning to do as an adult).

My father raised honey bees and sold honey and sorghum.  He made the best sorghum around.  But, like most things, we did it the “old fashioned” way.  Paw Paw Billy grew the sugarcane for my father.  He also loaned him two mules, Thunder and Lightening.  The mules were hooked up to an old fashioned grinder.  They would walk around in circles to grind the sugarcane for the sorghum.  Paw Paw taught me to chew on the sugarcane because “that’s why he grew it”.  Ha. I lived in a world where some people had electricity, and some didn’t.  Every Easter there was an Easter Egg hunt at my Uncle Bud’s mama’s.  Alma didn’t have electricity or indoor plumbing.  That’s just the way it was.  I have used an outhouse plenty in my life, and yet I am still afraid of snakes biting my booty!  (Never happened, yet!)  I remember the first time we got the Disney channel.   A lot of people in Villanow still don’t have tvs or cell phones.

I was twelve years old before I had ever been in a grocery store.  I was shocked that there were so many options.  I was disgusted that you could only purchase white eggs.  And I was DEVASTED when I saw the rows of plastic bears filled with honey.  All of my dads honey and sorghum went into mason jars, except mine.  Mine went into special plastic honey bears.  Which I learned anyone could get at the grocery store.

My days as a child were spent with some of the most amazing men to ever walk this earth.  They are the kind of men who don’t exist anymore.  They frequented the Liar’s Bench that sat outside our store.  It was a dusty, old, blue carpeted bench.  Nothing special, but I would pay a lot of money to own that bench today.  They sat around and told stories of their wives home cooking, their 50 lbs fish, and the monster buck that “got away”.  Most didn’t frequent the doctor’s office, that’s why they had my mama.  They wore faded jeans, dirty overalls, some had canes, and most wore old trucker hats.  They had worked hard all of their lives, never became millionaires (there are a few exceptions), and lived off of their land.  Most didn’t trust the banks.  They kept their money in pillow cases, stuffed under the mattress, or buried in the yard.  But they kept my piggy banks full of change, and brought me small tokens from their trips to Gatlinburg.  I would give anything to sit on that bench with them one last time. So why do I keep goats, chickens, and ducks?  Why am I learning to make soap and cheese?  Why am I learning to garden and can?  It is because if not, we lose these people and the things they taught us forever.  They taught me to not give up on that dying calf, the sick goat, or injured dog.  They taught me that everything I need can come from the dirt beneath my feet, my own hands, and a lot of work.  The way they lived is becoming a lost art.  Progress is a great thing, don’t get me wrong, but what about when progress fails?  When the food at the grocery store  makes us sick?  Or there is a milk shortage?  What do we do then?  I will look in my own back yard and I will thank my community and Bill, Billy, Ben, Bradley, and Wayne.  Men who taught me to do with little, and make a lot out of nothing.

On rainy days I can still smell that old dusty bench, even though it is only in my mind.  I can hear their “sugar, how you been?” and “Lil Rodney where are your shoes?”.

I want future generations to see a different way of life.  An old way of life.  The only way I knew for 12 years.  That is why I farm.