When we arrived in Africa it was a busy week.  We showed up the same week as the Tanzanian Leadership Conference and that meant there were lots of people from Tanzania AND all over the world coming in.  The home we live in (Cy and Stephanie Stafford’s) was a revolving door of new people.  But we loved it.  Justin and I quickly took to our new roles as hosts.  Cy left the first day of the conference, after he spoke, and so we spent our mornings making scrambled eggs from the school’s laying hens and making sure everyone was fed. 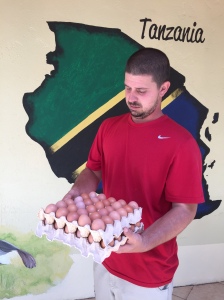 The Leadership Conference itself was amazing.  We heard some phenomenal lessons and I am sure everyone went away spiritually fed.  Justin was asked on Monday (the Monday before the Leadership Conference started on Friday) if he would speak at the conference.  Honestly, I was surprised he said he would – but that is only the beginning of the surprises since we moved here.  Justin has taken to Africa in a way I never thought he would.  Samantha said (of Justin) the other day that he was like a chick that had suddenly pecked through his shell and realized there is a whole big world out there.

Now, I will get back to Justin’s first sermon in just a few minutes.  People started pouring in that week and goodness were we blessed to meet some of the Brotherhood’s finest.  Sid Aultman came from Birmingham, Alabama.  We had lived for 3 years less than two hours from him and yet we met in Tanzania, Africa.  Our Bear Valley Brothers Wes Autry, Michael Hite, and Sean Hochdorf came and the week was filled with endless teasing and laughter.  They are greatly missed.  A fellow missionary, Dale (and I have suddenly drawn a blank on his last name), came from Malawi and he gave us lots of great tips on raising cows.  Close to 200 brothers and sisters from all over East Africa came.  Mike Benson, a friend from home is here, along with new friends Brian Horner and Diane.  I have said all of this to tell you about one friend we met in particular.  We had the privilege of meeting Phanat Ouch.  Phanat was raised in a refugee camp in America.  He grew up, just like any of us, in the wealth and pleasure of the United States.  After high school he went back to his homeland of Cambodia.  He learned the language, met his wife, and saw the great need for the Gospel in Cambodia.  Like all of us are called to do (in one way or another), he left the comforts of America to further the Gospel of Christ.  One of my favorite quotes from the week came from Brother Phanat – “The Kingdom of God has no borders.”  If only we all saw the world in this way.  If we could realize that it is not an “us” and “them” we could change the world. 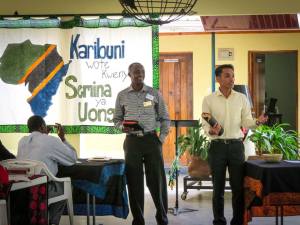 Now, back to Justin’s first sermon.  If I could compare Justin to any biblical character, when it comes to speaking, it would be Moses.  He can think of a 1,000 excuses why he can’t speak in front of people.  But God takes our weaknesses and shows his power by making them our strengths.  They are not our strengths because of our own doings but because of Christ in us.  That is the best way I can explain what happened when Justin was asked to speak.  Was he the most eloquent?  No.  Was he the most powerful? No.  Did he make his point and God was glorified?  Yes.  The crazy part was he didn’t sound in the least bit nervous.  When I asked him if he was nervous his reply was that he was before he went to speak but then he went to Charles’ office, prayed, and a peace settled over him.  He said when he stood before everyone he wasn’t in the least bit nervous. 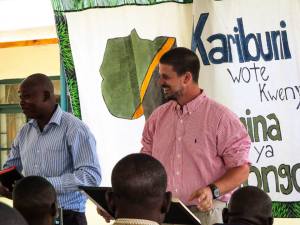 There is so much being done here and so much still to do.   Africa has a funny way of getting in your blood and coursing through your veins.  I think it stays in your heart forever.  I hope to post soon about all of the farm work being done.  I will start working on that.  But just like with this post… I started it when we had power, now I don’t, so it will be hours before I can post this and I just have to pray it doesn’t delete itself!

Until next time!  Kwaheri! 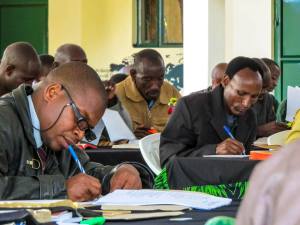